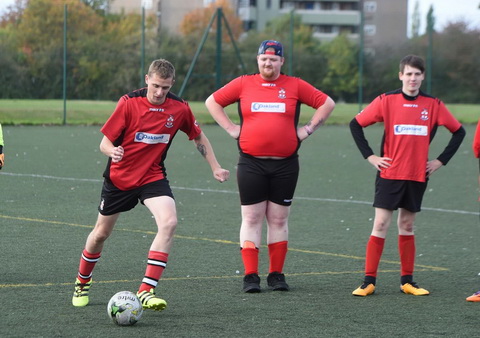 Disabilities, deformities and medical conditions are not supposed to hold someone back from achieving their most authentic self. Famous football players with disabilities (read about powerchair football) have overcome these challenges and accomplished massive things in their favourite sporting activities.

Following are some famous footballers with disabilities but did not let them get in their way. They have done marvellous things in their lives and made it clear that disabilities should not be why people avoid reaching for greatness.

They have made an impact in the football world by overcoming their disabilities and showing the world they have talent that needs to be seen. Let’s now take a look at the famous football players that brought inspiration to the world despite their condition.

Edgar Steven Davids is a Dutch professional footballer and is currently a coach. He has played for great teams such as AC Milan, Barcelona, Juventus, Inter Milan, Tottenham Hotspur, and Ajax. Edgar is easy to recognize when on the field owing to his dreadlock hair and protective goggles, which he had to wear due to his disability.

He suffered from glaucoma, which he did not let get in the way of his greatness. He was known to be combative and very energetic while on the field and to have a hard tackling style while playing.

His energy and creativity on the field are evidence of the fact that he was still able to be exceptional as a player despite having glaucoma. This should encourage the rest of us to try and be good at what we do since this is what we can do. Currently, Edgar is not acting as a player, but he plays his role as a coach.

Born Manuel Francisco dos Santos, Garrincha was a Brazilian football player who played the right winger. He is a professional player and regarded as one of the best players. Others recognize him for his exceptional dribbling skills. His skills were globally recognized in the 1958 and 1962 world cup victories by Brazil.

For instance, Pele was injured in the 1962 world cup, and Garrincha took his place, leading Brazil to victory. Garrincha had the congenital disability of a misshaped spine, and one leg was shorter than the other. This would cause the right leg to point inwards while the other leg pointed outwards.

Despite this defect, he was still a good player, and the performance that he put up on the field won him many awards. Many European teams tried signing him into their teams once he had gained recognition. This is all owing to the great dedication and a level of skill that is hard to match.

The Spanish striker has some of the best football skills, and you will be fascinated by the performance that he showcases while he is on the field. He is hardworking and is also known for his intelligence.

Alex was born with one hand but did not let this get in the way of achieving the best in football. He is also a passionate academic and has a law degree. As a striker or a midfielder, he portrays the best show of talent on the field, acting as inspiration for the many others that are feeling inhibited by their disabilities. His intelligence is evident both on and off the field and in academics.

Bastin had difficulty hearing which deteriorated as he got into his playing career. Despite the deafness, Bastin could still play and score as many goals as he could. He is one of the famous soccer players with disabilities. He was also part of the war effort but was discharged as his hearing problem became more serious.

Cliff stopped playing after a knee injury, but during his active playing life, he proved that he could perform an excellent performance and show the world how talented he was.

He was then in a car crash leading to his arm amputation, and this, to the world, seemed to be the end of his career. However, this did not stop him from getting back on the pitch, where he was able to show the world how good he could play while on the field. The fact that he could get back on the pitch after the car crash is evidence of Robert’s will, courage, and passion for the game.

Gordon Banks was involved in a severe car crash in October 1997, causing him to lose all sight in his right eye. 34 at the time, he retired for four years but eventually returned to the game. He was a goalkeeper and was known to be exceptionally talented. Despite his eye problems, he could handle his position on the field quite well. And his talent was evident in how he handled himself on the football pitch.

Yet another football legend was one-armed, but this did not dim his career. Even with one arm, Castro was still strong and talented; this was evident in his playing on the field. He was a robust striker gifted and scored goals for Uruguay in various tournaments.
His strength was apparent when he was on the field, as he could efficiently perform well and achieve goals for his country. Castro was talented, and his physical disability did not deter him from getting onto the football field.

Physical disabilities are not meant to keep people from achieving greatness. It should enable them to show the world how good they can be despite the deformities and conditions that they suffer from.

The above players struggled with physical disabilities (disability football overview), but this did not keep them off the field. They were talented and made an impression in the football world through their playing. True talent always shines despite the odds. And these are just some people who have shown their exceptional nature on the field.