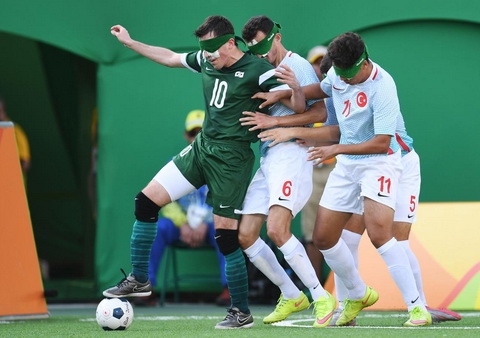 Football is one of the popular games loved by many. Most people are familiar with the normal football matches, how they are conducted and the rules guiding the game. Since it is a fun game, everyone can participate regardless of their body abilities and disabilities. Virtually impaired or partially sighted football is a special type of football for athletes with visual impairments. Blind football rules and regulations are different from those we are used to. So, in this article, we will discuss rules and regulations for blind football.

In addition to blind football, you can also learn to play regular soccer, soccer tennis and futsal.

A match consists of two teams, each with five players. Four of the players must be blind category B1. The goalkeeper may be partially or fully sighted categorized as B2OR B3. A guide is also included. A full team squad is composed of a maximum of fifteen members. They include one head coach, one assistant coach, eight out-field players, one guide, two goalkeepers, one physiotherapist, and a doctor. In case a team needs a translator, one coach translator may be authorized. But he or she is not part of the official squad.

How to play blind football?

Firstly, one full match has two halves of 20 or 25 minutes, with a halftime break of ten minutes. Either team can call a one-minute time-out in each half. All out-field players put on blackout eyeshades and shin guards to ensure the game is fair and equal. The goalkeeper must stay in their area throughout the match but can talk to the out-field players to give instruction.

Secondly, the coaches in each team are fully sited. And their area is behind the opponent team’s goal and on the halfway line. This arrangement ensures the coach behind the goal can instruct the forward players while the assistant coach on the sideline directs the midfielders. The goalkeeper is tasked with organizing the defense.

The international field dimension is 38 to 42 meters by 18 to 22 meters. The playing pitch can be grass, cement, or artificial turf. Rebound panels are used to surround the pitch, where they are designed to create an acoustic echo. The echo helps the players to locate each other and their positions by clicking fingers and when the ball is going out and in of play.

Firstly, one of the rules for blind football requires the ball to have a sound device for players to hear it and locate where the ball is or where it is spinning towards. Blind football has no off-sides or throw-ins rule. Thence the game has few interruptions and is very fast. The ball is considered to go out of play if it hits the ceiling of an indoor pitch or over the kickboards.

During a penalty kick, the attacking coach taps both the crossbar and the vertical posts for the player to process the sound and know where to place the ball. When the match is on or during penalties, the fans maintain silence to enable players to hear when the coach is talking to them and hear the ball as it moves.

Blind football rules require the players to shout the ‘go’ or ‘voy’ before making a tackle to notify the player with the ball of the tackle’s direction. That prepares the player to counter the tackle and be alert in case of any contact.

Rules for blind football stipulate that players may use substitutes in any match under the aegis of IBSA or national member association and the rules of an official competition.

Six substitutions can be made in each half for every team. The number of substitutions made does not affect the first or second half substitution numbers at halftime. Substituted players can return to the field to replace another player.

Under the B1 category of players, only four substitutes of out-field players and one goalkeeper. So, if the two goalkeepers have been injured, and the match doctor confirms their injuries, any team official is allowed to act as a goalkeeper. The official must not be a B1 player. In case the match was a national one, the official replacing the goalkeeper must be of the same nationality as the team to be allowed as a substitute.

Blind football rules follow the following conditions to make a substitute, and substitutions are only made when the ball is out of play.

If by any chance a substitute enters the field while the ball is in play;

Rules of blind football recognize a legitimate goal as if the ball goes past the line, under the crossbar, and inside the goal. The goal will stand provided the ball was not thrown, carried, or intentionally moved by the arm or hand of the attacking team, including the goalkeeper, and the scoring team has not infringed any rules of the game leading to the goal.

Competition regulations may come up with other ways to determine the winner for drawn matches.

Blind football games, like any other game, follow some rules and regulations to make the game playable. So, if you wondered how visually players might carry out an impaired football match, the article enlightens you about the rules of blind football that guides the game. More about blind football you will find in the page of blind football asociation.